Kailanie has been through more yucky stuff than most kids her age—19 surgeries in her first three years of life. But no matter what, she makes the best of everything.

Preferred to be called by her nickname, Unicorn Superhero Warrior Princess, this unstoppable little girl has lateral meningocele syndrome (LMS), a rare disorder that affects the nervous system. On top of that, Kailanie was also diagnosed with acute lymphoblastic leukemia (ALL) last year.

But as her mom, Vanessa, said, “You just can’t keep her down! She’s just a happy-go-lucky kid.”

MyMusicRx perks Kailanie up and her Chemo Pal mentor, Dan, can always be counted on to brighten her day with his big bag of toys and welcoming smile.

For This Superhero Princess, Friendship is a Powerful Ally

Ever since Kailanie came into the world, she’s faced one hurdle after another. But her frequent visits to the hospital come with a silver lining: her Chemo Pal mentor, Dan.

“Having someone to play with during her appointments has made a tremendous difference. She gets very happy when she sees Dan,” said Jonathan.

Even though Kailanie is non-verbal, Dan says they’ve had no trouble bonding over her favorite activities. “She likes music and playing games, but she especially loves Play-Doh,” he smiled. “So, we speak the shared language of Play-Doh.”

Despite all her medical challenges, Kailanie isn’t about to let life pass her by. There are just too many things that bring her Joy like dancing, listening to music, or jamming along to her favorite songs with CCA’s MyMusicRx Specialists.

One of her very favorite things to do is to keep tempo with an egg shaker, although she’s been known to switch things up by accompanying her dad on xylophone while he serenades her.

“Music makes her happier—she can be in a down mood, and when the MyMusicRx team walks in and asks if she wants some music, she just lights up,” said Vanessa.

Kailanie is one of nearly 8,000 hospitalized kids whose moods were lifted by music played with CCA’s bedside MyMusicRx Specialists last year. 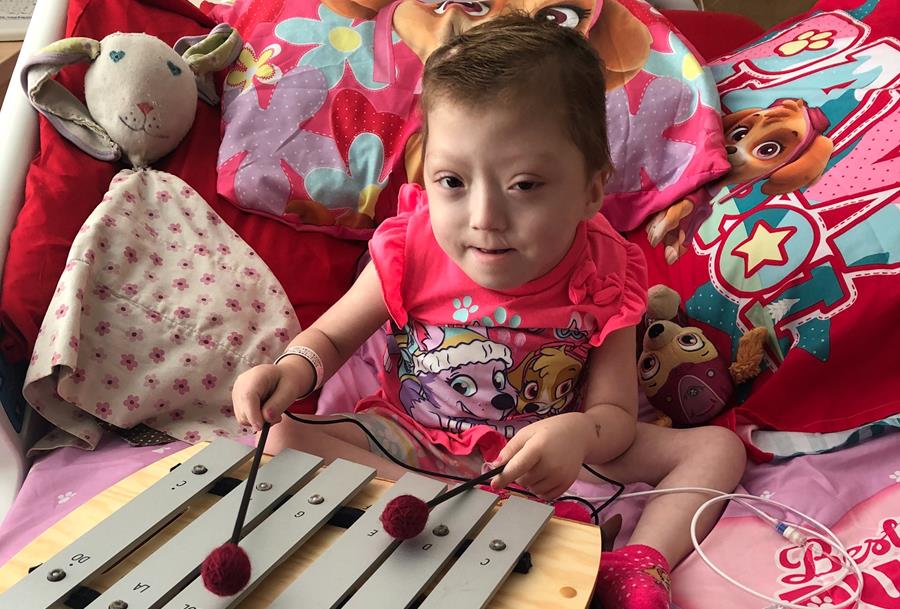 A Life Lived with Joy

Unlike so many of us, Kailanie doesn’t have to work to find Joy. She embodies pure Joy and inspires others to do the same. That lesson isn’t lost on her Chemo Pal mentor, Dan, who says he’s grateful for all that this courageous little girl has taught him.

“Kailanie has really become a role model for me,” he said. “I’ve learned so much about Joy and resiliency from her.”

You have the power to give Joy to kids like Kailanie—and other kids and teens who are battling serious illness. Thank you!

The 2nd / 3rd grade classroom at Resurrection Catholic Primary School (RCPS), located in Tualatin, Oregon, committed to spread Joy for their 2021 – 2022 service project by supporting JoyRx, the mission delivery of Children’s Cancer Association. Over the course of the year, the staff and children hosted a variety of fundraising activities to sell… Read more »

A recent independent literature review by Karyl Askew Consulting proved what we’ve known all along at JoyRx: that music makes sick kids feel better. And not just emotionally—in addition to benefits for mood and mental well-being, music also decreases pain and anxiety. The impact is all-encompassing, benefiting the emotional, physical, psychosocial and developmental wellness of… Read more »

Despite being a charming teenager who loves to crack jokes for his family, Julio, who lives with Trisomy 21, or Down Syndrome, struggled to connect socially with others, an issue that was exacerbated during the pandemic. He had been working on this with Child Life Specialist Allison Moore at Dell Children’s Hospital for two years… Read more »

Enter the Joy Ride Summer Car Giveaway for a chance to win a new Audi A3 Sedan from Audi Beaverton.